In fact, you might say these foods are a lot more memorable and appealing than a steak or salmon filet.

Many on-trend peasant foods are global specialties, emblematic of such popular, flavor-packed cuisines as Italian, Mexican, and the American regional South. A lot of them are comfort foods, reflecting the kind of skilled preparation and low-and-slow cooking that few patrons have the time for. And that gives them an authenticity that is so important to today’s consumers, in particular food-loving Millennials.

Many of the world’s most economical foods are also the most comforting and true to the trends. In addition to offering low food costs, many can also be prepped ahead and simply served or finished on the pick-up.

Polenta – Boiled, slow-cooked cornmeal is delicious and versatile, and often served as a side dish—instead of mashed potatoes or rice—with saucy specialties like short ribs or stews, and can be flavored with cheese and other ingredients. It can also be cooled on a sheet pan and cut into squares or ovals to grill, bake, or fry and serve as a crostini-like base. Polenta is also being used in rustic cakes.

Grits – This Southern staple is also made from corn, in this case hominy that has been treated with an alkali to make it white. Grits are popular as a porridge served with breakfast, and can be flavored with cheese, garlic, chiles, scallions, and other ingredients. They’re also showing up more frequently as a side dish for proteins, such as shrimp and grits.

Sausages and Other Meat Mixtures

Peasant food reveals a rich history of local cultures using scraps and trim from butchering pigs and other animals, letting none of that precious meat go to waste. Artisanal-minded chefs are sourcing these products and also making them in-house as part of nose-to-tail programs, creating flavorful fresh and aged sausages as well as charcuterie such as pâtés and terrines. Originally developed as a means to use every part of the animal, these specialties now have an upscale image.

Ground meats and scraps can also be repurposed and extended with other ingredients into meatballs, loaves, patties, croquettes, and rissoles, beloved the world over as culinary signatures.

Not every cut of meat can be the tenderloin. From shanks, to shoulders, to bellies, there are hardworking muscles and subprimal cuts that require skill and time to turn them into delicious meals. Specialties like lamb and veal shanks, beef short ribs, tongue, lamb neck, beef cheek, brisket, pork belly, pig trotters, and pork shoulder, as well as “lesser” steaks like chuck and blade are full of flavor when they’re treated to low-and-slow cooking techniques such as braising, roasting, and smoking. From pork carnitas to osso buco, these alternative cuts are staples of global cuisine.

In addition to serving in traditional center-of-plate applications, meats like pot roast and pulled pork are excellent in sandwiches, tacos, and other recipes.

Pulses are one of humankind’s longest cultivated plants, so it stands to reason that there are hundreds of traditional recipes that feature affordable, protein-rich beans and legumes. The variety of fresh and dried beans available—fava beans, chickpeas, pinto beans, and more—makes this a particularly versatile ingredient category.

Cassoulet – Originating in Southern France, this rich, slow-cooked casserole contains pork or lamb, pork skin or bacon, and white beans, and is often finished in the oven with a topping of breadcrumbs.

Pasta e Fagioli – Italian pasta and beans is a bowl of hearty comfort, and can be prepared as a meatless dish, using any number of different bean varieties and pasta shapes.

Chana Masala – This dish of savory, spicy Indian chickpeas is traditionally flavored with green chiles, onion, garlic, fresh cilantro, tomatoes, and a blend of spices such as ginger, cumin, coriander, and black pepper.

Remember what happened to squid? Rebranded as calamari and fried up crispy and served with a sauce, this funny-looking cephalopod was one of the earliest alternative fish species to go mainstream. Now, thanks to more adventurous dining habits and growing concern about the sustainability of premium species like tuna, cod, and swordfish, the bycatch once only enjoyed by fisherman and thrifty Mediterranean, Mexican, and Asian cultures is catching on.

The Role of Acidity in Flavor 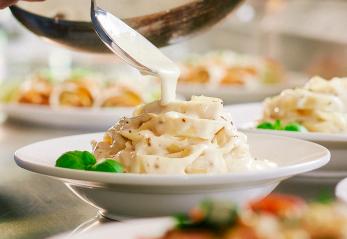 Alfredo All The Way. In So Many Ways. 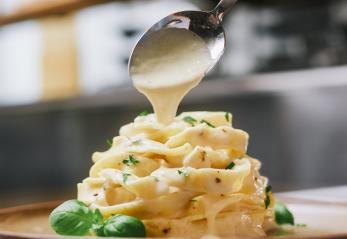 Pour on the Possibilities