There are a variety of reasons for the fusion of ingredients, flavors, and techniques from one cooking tradition into another.

I’ve been experimenting recently with modernizing and expanding the boundaries of traditional New England favorites, like pot roast and chowder, with new flavor profiles—particularly Moroccan, Mediterranean, and Middle Eastern spices and condiments, which have much more pronounced flavors than ours.

Imbue predictable pot roast with warm, beef-friendly spices from the Middle Eastern pantry (like cumin, coriander, allspice, turmeric, and cayenne) to give it a one-of-a-kind spin that still works on a traditional menu, paired with mashed potatoes or rice.

Or consider chowder, a dairy-rich classic that is perennially popular but not always innovative. In the Nestlé Professional kitchen, we decided to develop a lighter, more distinctive, plant-forward, and gluten free interpretation of this soup. We poached chopped cauliflower core in almond milk until the scraps were very soft, and then pureed that mixture for the chowder base. For the inclusions, we sweated chopped onions, garlic, carrot, celery, potato, and cauliflower florets until they softened, then added white wine and reduced it au sec (until almost dry). Finally, we combined the purée with the inclusions and seasoned the chowder with salt and Minor’s® Herb de Provence Flavor Concentrate, with its versatile blend of marjoram, rosemary, thyme, basil, and garlic notes.

Glazed carrots are another great example of how the concept works. It begins with the time-honored method of cooking sliced or matchstick carrots in water, sugar, and stock, but is enhanced by the addition of za’atar spices and finished with the addition of a carrot beurre monté, and a sprinkling of carrot-top gremolata, made with garlic, lemon zest, and chopped, reserved carrot tops substituting for some of the traditional parsley. In addition to elevating a familiar dish with unexpected flavors, this recipe helps with utilization of the carrot, a “root-to-shoot” strategy for minimizing food waste.

In general, spice mixes, condiments, and sauces represent an excellent way to cross culinary borders and boost flavor in recipes. Spice blends like za’atar, dukkah, and ras el hanout have become extremely popular, adding a pop of bold flavor as well as color and even texture (dukkah, for instance, includes freshly toasted nuts and seeds), with a nod to on-trend Middle Eastern flavors. Za’atar is a blend of dried thyme, oregano, marjoram, sumac, toasted sesame seeds, and salt, that brings notes of herbs, lemon (from the sumac), and the nuttiness of the sesame seeds, versatile enough for poultry, flatbreads, fish, and all kinds of vegetables and starches.

There are a number of global sauces worth considering: Romesco, a versatile Spanish sauce made with roasted red peppers, tomato, chopped almonds, paprika, and vinegar, thickened with bread, is a big opportunity, working as a dip for crudité and breadsticks, or a sauce for grilled chicken or fish. And there’s quite literally a world of classic green sauces that can be used to imbue recipes with international flavor, from chermoula and zhug to pesto and salsa verde.

Pesto alone works as a sandwich spread, a pasta sauce, a flavoring for hummus, a garnish for soup, a simmer sauce for shrimp, or in a stuffing for chicken breasts. And that’s to say nothing of switching up the traditional Italian backbone of basil and Parmesan cheese to cross-cultural ingredients like cilantro, mint, sundried tomatoes, or garlic scapes.

Minor’s GreenLeaf Pestos are available in Basil and Cilantro varieties.

Hummus is a popular menu item that can support lots of experimentation: Swap out the traditional chickpea base for black beans or white beans, with cilantro and chile for a Mexican spin, or drizzle with romesco and garlic oil to bring a Spanish twist.

Food Halls: The Next Big Thing 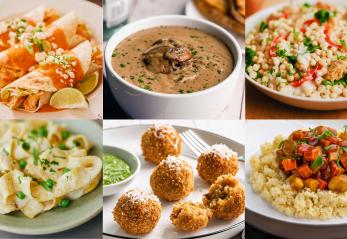 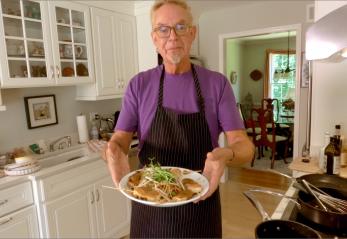