In fact, Datassential tells us that “smoked” is on 45.9% of U.S. menus. Meanwhile, hundreds of restaurants are turning to live fire cooking to boost flavor in American and international cuisines alike.

Of course, not every food service chef has a smoker or a wood-fired grill or oven at their disposal. And that’s where ingredients and techniques with inherent smoky flavors come into play.

Smoked chiles are one product that come immediately to mind. Many popular fresh chiles have a smoked and dried variation. Jalapeños, for instance, are smoked to create chipotles; the flavorful, smoky-sweet nature of chipotles make them one of the most popular and distinctive of all the Mexican chiles. Chipotles in adobo are smoked and dried jalapeños that have been rehydrated and canned in a tangy-sweet purée of tomato, vinegar, garlic, and spices that can be used to add smoky complexity to a variety of foods.

Another popular dried chile, the ancho, begins life as a fresh poblano pepper. Smoky and sweet, it brings an earthy pepper taste with hints of raisin and coffee to sauces, especially moles.

Aleppo pepper is made from a dried and crushed chile pepper that is used as a spice in Middle Eastern and Mediterranean cuisine. It has a mild, smoky fruitiness that is reminiscent of cumin, with just a touch of salt and vinegar flavor. Aleppo brings its intriguing flavor to dips, flatbreads, and other Middle Eastern mezze.

Pimenton de la Vera, or smoked paprika, is another pepper-based spice that can be used to bring a smoky flavor to foods. Though Spanish in origin, pimenton is wonderful in vegetables, eggs (including deviled eggs), sauces such as barbecue, spice rubs, and marinades, and it’s a game changer for salad dressing.

Using smoked proteins is another great way to bring smoky flavor to foods. Bacon tops the list—especially considering the growing popularity of varieties with specific flavor profiles, such as applewood and hickory—but ham is another product that can be added to everything from breakfast specialties to salads and sandwiches. Country and other specialty hams have the added advantage of an artisanal image that is very on-trend today.

High-quality prepared smoked meats such as sausage, ribs, pork, brisket, chicken, and turkey are also more widely available to food service and can tie menu specialties to popular regional barbecue styles. And while its flavor is generally more delicate, smoked seafood including salmon and trout can be used to trade on the appeal of smoky foods and flavors.

Certain cooking techniques can also be deployed to mimic the flavor that woodsmoke brings to foods, including searing and charring. Both cooking processes create flavorful browning and caramelization through the Maillard reaction.

In fact, charred foods, such as tomato and onion, are particularly popular in sauces and salsas—a process that can take place in a wok or a black iron pan over high heat.

The popularity of plant-based menu items has helped to drive this trend, creating high-impact flavors in vegetable specialties like Brussels sprouts, carrots, and corn.

The more familiar seared cooking process, which is most often associated with browning and cooking proteins, appears on 22.1% of U.S. menus, says Datassential.

Finally, there are also several spirits with inherent smoky flavors that can be used to enhance food as well as beverages, including certain varieties of Scotch as well as Mexican mezcal. And then, of course, there is cannabis, which is starting to make inroads on food service menus and beverage lists. A special 2018 issue of Datassential Foodbytes explored how “cannabusiness is becoming big business, attracting new entrepreneurs, award-winning chefs, and well-known food brands.” 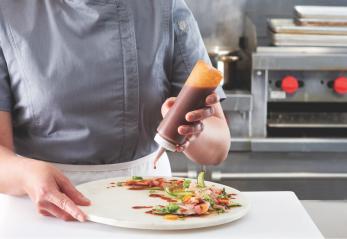 The Evolution Of Comfort Food 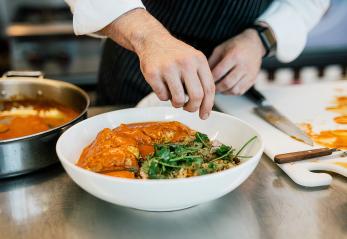